Induction heating is the process of heating an electrically conducting object (usually a metal) by electromagnetic induction, through heat generated in the object by eddy currents. An induction heater consists of an electromagnet and an electronic oscillator that passes a high-frequency alternating current (AC) through the electromagnet. The rapidly alternating magnetic field penetrates the object, generating electric currents inside the conductor, called eddy currents. The eddy currents flowing through the resistance of the material heat it by Joule heating. In ferromagnetic (and ferrimagnetic) materials like iron, heat may also be generated by magnetic hysteresis losses. The frequency of current used depends on the object size, material type, coupling (between the work coil and the object to be heated) and the penetration depth.

An important feature of the induction heating process is that the heat is generated inside the object itself, instead of by an external heat source via heat conduction. Thus objects can be heated very rapidly. In addition there need not be any external contact, which can be important where contamination is an issue. Induction heating is used in many industrial processes, such as heat treatment in metallurgy, Czochralski crystal growth and zone refining used in the semiconductor industry, and to melt refractory metals that require very high temperatures. It is also used in induction cook-tops for heating containers of food; this is called induction cooking. 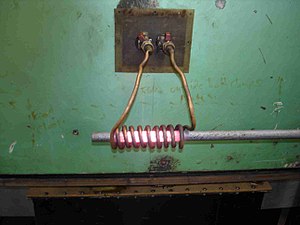 Induction heating allows the targeted heating of an applicable item for applications including surface hardening, melting, brazing and soldering and heating to fit. Iron and its alloys respond best to induction heating, due to their ferromagnetic nature. Eddy currents can, however, be generated in any conductor, and magnetic hysteresis can occur in any magnetic material. Induction heating has been used to heat liquid conductors (such as molten metals) and also gaseous conductors (such as a gas plasma—see Induction plasma technology). Induction heating is often used to heat graphite crucibles (containing other materials) and is used extensively in the semiconductor industry for the heating of silicon and other semiconductors. Utility frequency (50/60 Hz) induction heating is used for many lower-cost industrial applications as inverters are not required.

A similar, smaller-scale process is used for induction welding. Plastics may also be welded by induction, if they are either doped with ferromagnetic ceramics (where magnetic hysteresis of the particles provides the heat required) or by metallic particles.

Seams of tubes can be welded this way. Currents induced in a tube run along the open seam and heat the edges resulting in a temperature high enough for welding. At this point, the seam edges are forced together and the seam is welded. The RF current can also be conveyed to the tube by brushes, but the result is still the same—the current flows along the open seam, heating it.

In the Rapid Induction Printing metal additive printing process, a conductive wire feedstock and shielding gas is fed through a coiled nozzle, subjecting the feedstock to induction heating and ejection from the nozzle as a liquid, in order to refuse under shielding to form three-dimensional metal structures. The core benefit of the procedural use of induction heating in this process is significantly greater energy and material efficiency as well as a higher degree of safety when compared with other additive manufacturing methods, such as selective laser sintering, which deliver heat to material using a powerful laser or electron beam.

In induction cooking, an induction coil inside the cook-top heats the iron base of cookware by magnetic induction. Using induction cookers produces safety, efficiency (the induction cook-top is not heated itself) and speed. Non-ferrous pans such as copper-bottomed pans and aluminium pans are generally unsuitable. By induction, the heat induced in the base is transferred to the food inside by conduction.[1]

Induction brazing is often used in higher production runs. It produces uniform results and is very repeatable. There are many types of industrial equipment where induction brazing is used. For instance, Induction is used for brazing carbide to shaft.

Induction heating is used in cap sealing of containers in the food and pharmaceutical industries. A layer of aluminum foil is placed over the bottle or jar opening and heating by induction to fuse it to the container. This provides a tamper-resistant seal, since altering the contents requires breaking the foil.[2]

Induction heating is often used to heat an item causing it to expand prior to fitting or assembly. Bearings are routinely heated in this way using utility frequency (50/60 Hz) and a laminated steel transformer-type core passing through the centre of the bearing.

Induction heating is often used in the heat treatment of metal items. The most common applications are induction hardening of steel parts, induction soldering/brazing as a means of joining metal components and induction annealing to selectively soften an area of a steel part.

Induction heating can produce high-power densities which allow short interaction times to reach the required temperature. This gives tight control of the heating pattern with the pattern following the applied magnetic field quite closely and allows reduced thermal distortion and damage.

This ability can be used in hardening to produce parts with varying properties. The most common hardening process is to produce a localised surface hardening of an area that needs wear-resistance, while retaining the toughness of the original structure as needed elsewhere. The depth of induction hardened patterns can be controlled through choice of induction-frequency, power-density and interaction time.

Limits to the flexibility of the process arise from the need to produce dedicated inductors for many applications. This is quite expensive and requires the marshalling of high-current densities in small copper inductors, which can require specialized engineering and "copper-fitting."